According to the UNHCR (United Nations High Commissioner for Refugees), there were over 26 million refugees worldwide in 2019. In today’s article we will try to explore this figure by seeing some data on the nations or territories of origin. Before seeing the data here is the definition of a refugee. Refugees are people who are recognized as refugees under the 1951 Convention Relating to the Status of Refugees or its 1967 Protocol, the 1969 Organization of African Unity Convention Governing the Specific Aspects of Refugee Problems in Africa, people recognized as refugees in accordance with the UNHCR statute, people granted refugee-like humanitarian status, and people provided temporary protection. Asylum seekers–people who have applied for asylum or refugee status and who have not yet received a decision or who are registered as asylum seekers–are excluded. Palestinian refugees are people (and their descendants) whose residence was Palestine between June 1946 and May 1948 and who lost their homes and means of livelihood as a result of the 1948 Arab-Israeli conflict. Country of origin generally refers to the nationality or country of citizenship of a claimant. Refugee Population by Country or Territory of Origin.

In the video below you can see the year-by-year data of refugees by territory or Country of Origin. In total, there were 20,063,079 refugees in 2019. Of these, almost an over 30% came from Syria. In fact, in 2019, there were 6,616,983 Syrian refugees. This is followed by Afghanistan, with 2,728,863 and in third place South Sudan with 2,234,814. These first three nations, when added together, account for over 50% of the total refugees in all of 2019. Next among the different nations are Myanmar, Somlia, Congo Democratic Republic and others. The top 15 nations in the world also include China with over 212,000 refugees.

Moving the needle back to 1965, there were an estimated less than 2 million refugees. The highest share was in China. In 1965 the Chinese refugee quota was 1,330,000. Angola, Rwanda and Sudan followed. Among the top countries in the world were also countries that have joined the European Union, such as Greece and Hungary. I suggest you watch the video above because, over the years, the data has evolved following geo-political situations. Among the individual nations besides the already mentioned Syria, due to the recent war, another nation with a very high figure was Afghanistan, which exceeded 6 million refugees in the 1990s.

Globally, how has the refugee population changed over the last 30 years? Depending on wars, economic crises and other factors, the refugee population tends to rise and fall. Climatic factors will also play a major role in the short but also in the medium to long term. More and more territories are becoming “unlivable” for thousands of people.

Globally, the refugee population in 2019 reached its highest figure in 30 years. In fact, there were over 26 million refugees in 2019. The lowest figure in the last 30 years was in 2005 when there were around 13 million total refugees, half the current figure. From 2008 to 2012 the overall situation was stable, in the figures, but it is since 2013 that the figure has risen sharply, first exceeding the levels of the 1990s and then reaching 26 million in 2019.

In order to understand how the top 15 countries in the world in terms of the number of refugees affect the total number of refugees, I made this tree map. Interestingly, the rectangle “other nations” is smaller than the third largest refugee nation.

Refugees of the Syrian civil war

The population of Syria in 2010 was about 21 million. Over time, however, due to the civil war, the number of refugees increased dramatically, reaching more than 6.5 million in just one year in 2018. The 2019 figure is slightly down on 2018, by a few thousand, but still remains extremely high compared to previous years and extremely higher than in the 1980s where there were barely 500 Syrian refugees.

In this diagram, taken from Wikipedia based on data provided by UNHCR, you can see where Syrian refugees have settled (beyond Syria itself). The figure obviously does not take into account unregistered refugees or legal immigrants. In general, the largest share was taken in Turkey, Lebanon, Jordan but a large part was also taken in Germany (European Union). For example, in Germany the net immigration from Syria is calculated at 788,000 people.

Nations with the Highest Refugees Density (2017) 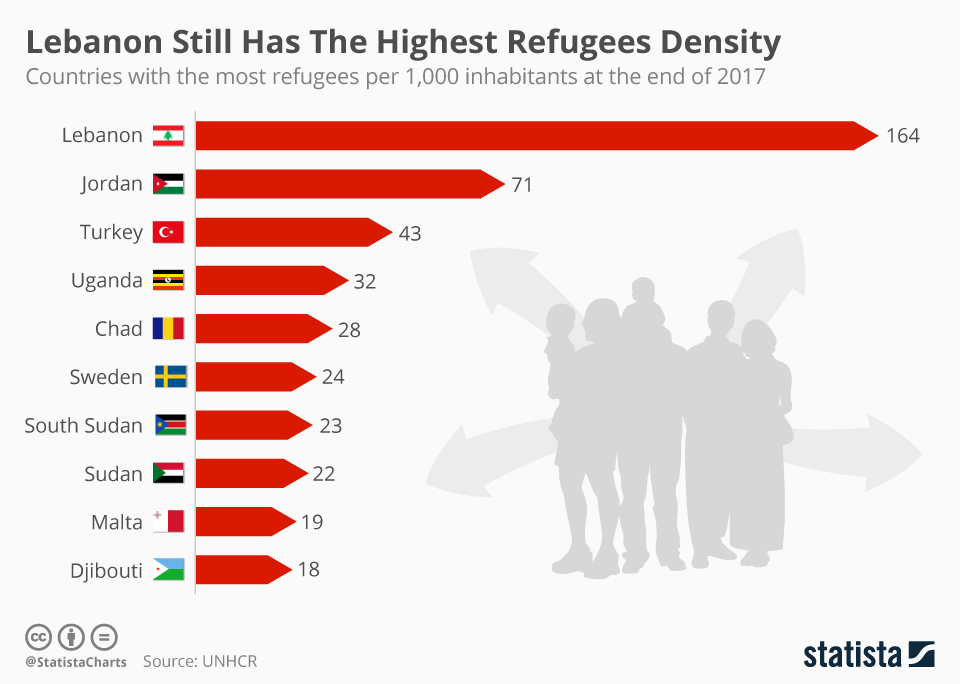 I used several sources to make the article and video. For the first data, the world bank database was used.

For the second data: Statista and UNHCR.

To view the video on YouTube: https://youtu.be/jRSLNfOY9vE. Refugee Population by Country or Territory of Origin.

8 billion people on November 15, 2022. That is the figure projected by the UN to be reached in the coming weeks. But how many