If a few weeks ago I tried to analyze the poverty rate in the United States, from 1980 to 2019, in this new article the goal is to delve into the data on homelessness. Between the two data points, poverty rate and number of homeless people there is usually a correlation. The higher the poverty rate, the higher the number of homeless people in a state, or in a city. In general, the economic crisis generated by Covid-19 has produced an increase in homelessness in the United States as well as in Europe and other nations. But let’s start by looking at some data.

Let’s start with an initial data point. Homelessness in the United States of America, or people without a home, is currently over half a million. In fact, the precise 2020 figure according to the Department of Housing and Urban Development is 580185. The 2020 figure tends to be better than in 2007. In fact, compared to the financial crisis of 2008, homelessness has decreased by about 60,000 units. The interesting aspect of this figure, however, is that nononstate the trend was upward in recent years (2016 was the lowest year), from 2016 onward the figure went back up slightly. In 2019, the figure was up about 16,000 people from 2016. And in 2020, due to the Covid-19 economic downturn, the figure went back up to 580 thousand people.

Which state has the most homeless people?

We saw above how the data at the U.S. level is increasing (albeit slightly). But at the state level, which states are experiencing the most homelessness? To answer this question I made this map that shows the evolution of homelessness by state in the U.S. If in the U.S. the homeless in 2020 were about 580 thousand, only in California the number was 161 thousand 548. California is therefore the first state by number of homeless followed by New York with 91 thousand 271.

In the map, it is interesting to note that the geographic distribution of homelessness in 2007 was more heterogeneous than in 2020. In fact while California’s figure was already very high in 2007 with nearly 139 thousand homeless people, the distribution was less even and the concentration in individual states was lower. There were significantly fewer states colored blue in 2007 than in 2020.

To understand this phenomenon even more, I created this treemap showing the distribution of homelessness by state. The first figure refers to 2007.

Instead, below is the distribution, again via treemap, of homelessness in 2020. While the overall number has decreased, the data has increased in absolute numbers from 2007 to 2020 in both California and New York.

The cities with the most homeless people in the United States

Earlier in the article we looked at the general trend of homelessness in the United States. Then the trend in individual states. In this last part we try to understand the distribution by city. In this sense we are helped by the infographic created by Statista that answers the question: which are the cities with the highest number of homeless people in the United States? 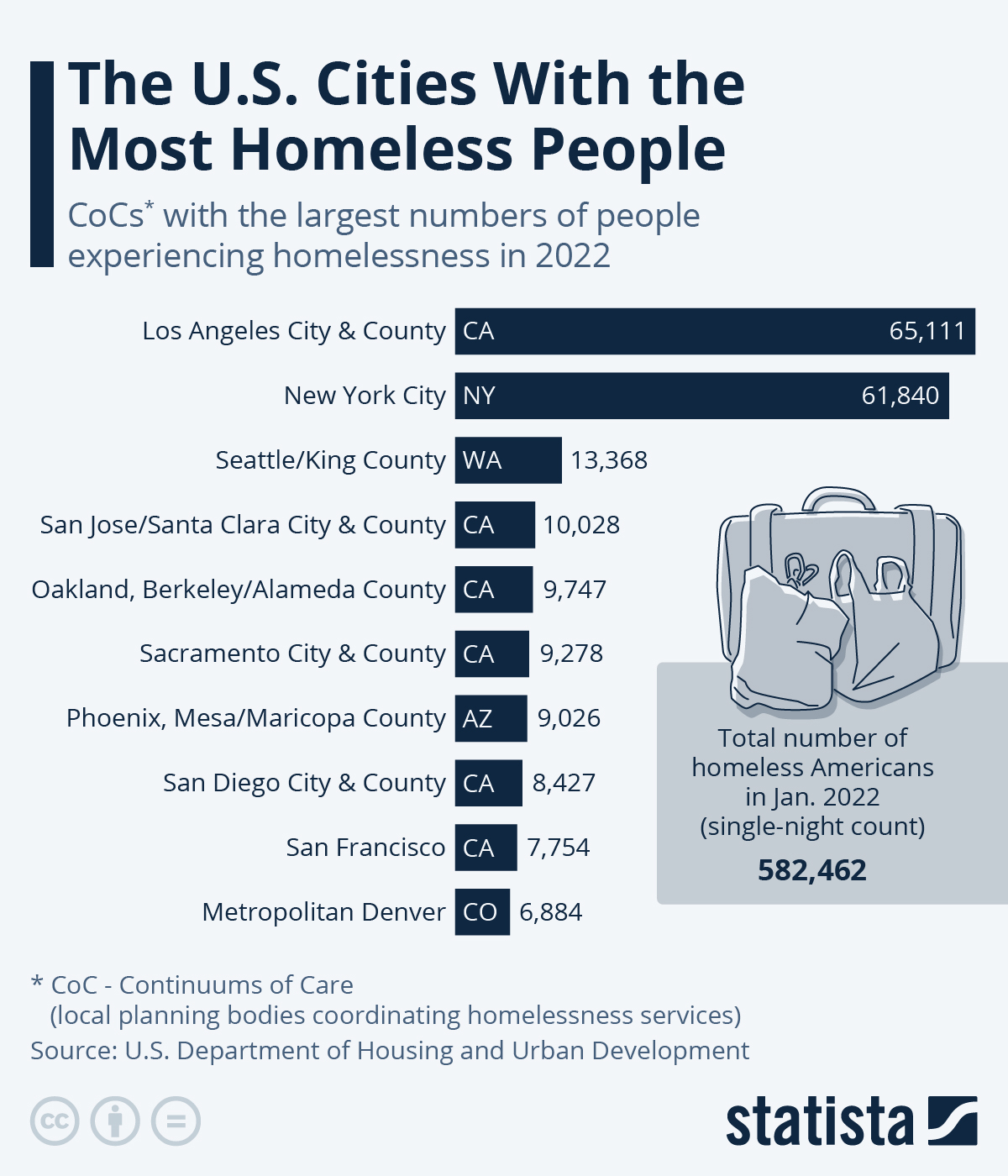 The “top” city in 2020 for homelessness is New York City with a figure close to 78 thousand people. New York is followed by Los Angeles City & Country with 63 thousand and 700 people. These first two cities together in 2020 had a share of 140 thousand people without a home. This is a decidedly high figure if we consider that across the United States the total is 580 thousand. Decidedly distant in absolute terms are Seattle, San Jose, Oakland, San Francisco and others. The interesting fact about this chart, however, is how most of the cities are part of California. Among the 10 cities with the most homelessness as many as 6 are from this state. 1 from New York, 1 from Washington (Seattle), 1 from Arizona (Phoenix) and 1 District of Columbia.

I used data from the Department of Housing and Urban Development to create the article.