After having seen some days ago the data about the first countries of the world for wine consumption, in this article we will analyze the consumption of beer. We will see which are the first 15 countries in the world for beer consumption, from 1961 to 2018, and in general how is changing the world consumption. The data refer to the World Health Organization Global Health Observatory (GHO). Top Nations by Beer Consumption per Person – 1961/2018.

Let’s start by answering a first question. What are the top nations in the world for beer consumption in 2018? As with wine, the figure refers to pure alcohol (in liters). In a beer, for example, the average alcohol figure is between 3 and 8%.

Coming back to the question, in first position we find the Seychelles archipelago (made of 115 islands) of Seychelles. As a matter of fact in this territory the liters drunk far exceed all the other nations. The figure for Seychelles is almost 11 liters per person. In second position we find the Czech Republic with a value of 6.89 liters per person and in third place Austria. Among the first 15 nations of the world we also find Poland, Gabon, Germany, Panama, Latvia, Romania and Ireland. All of these nations have a value greater than 5 liters. This is followed by Croatia, Slovenia and Spain, with a value between 4.5 and 5 liters. Lithuania and Belgium close the top 15.

And in 1961 what was the situation? The top nation in the world for highest beer consumption was Belgium. The European nation had a value of more than 8 liters per person. Next was Eswatini and in third place New Zealand. They were followed by Germany and Australia. It is interesting to notice in 1961 there were two nations from Oceania in the top 15. Moreover, in the top 15, besides many European countries, there were also 3 American countries: Canada, United States and Colombia.

Data on beer in Europe

Thanks to the data present in Brewersofeurope.org it is possible to see many interesting facts about beer (in Europe). As you can see in the Euorpean Union the total number of breweries is 11,048. In general, the production in hectoliters of beer is increasing from 2013 to 2019. In fact, it goes from a figure of 386 million hectoliters to almost 402 in 2019. However, the 2019 figure is lower than in 2018. It is possible that Covid-19 has impacted strongly. In fact, not only production but also consumption declined. Again, the 2019 figure is higher than 2013 but lower than 2018. Beer consumption per person (in this case understood as the total beer figure, not just alcohol) averages 72 liters per person.

Due to the Covid-19 pandemic, the export of beer from Europe has declined sharply. At the same time – consequently – the importance has increased. In terms of hectoliters, the import of beer increased from over 44 million to 60 million. The growth from 2018 to 2019 was more than 10%.

The first nations in the world for beer production

If in the video above we saw data about consumption and in the infographic data about the European Union in this paragraph we will try to see data about production. Which are the nations that produce the most beer in the world? And how has the data changed from 2000 to 2018? In this case we will use data from: http://iardwebprod.azurewebsites.net/science-resources/detail/BeerCider-GlobalData.

The top three nations in the world for beer production are: China, the United States and Brazil. These three countries produce together a value of 776,997.04 thousand hectoliters. In the first three countries for production we do not find any European nation. In fact the first EU country is Germany, in fifth position, with a value of 93685. Russia is followed by the Asian countries.

In 2000, the values were decidedly different. The top two nations in the world were still China and the United States. But the difference between the first and the second was much narrower. Also in third place for beer production in the world was Germany. In general, from 2000 to 2018, both countries in the Americas and Asian countries grew strongly. European countries, on the other hand, seem to have decreased growth in production.

I used several sources and data to create this article. The first is World Health Organization Global Health Observatory (GHO). From their databases, I was able to reconstruct consumption data from 1961 to 2018.

At https://brewersofeurope.org/site/countries/key-facts-figures.php I found the infographic with all the data on the 28 countries of the European Union.

Finally through the ardwebprod database I created the data on production in 2000 and 2018.

If you like it and want to support the channel donate a coffee to the Statistics and Data project: https://ko-fi.com/statisticsanddata
See video on Youtube: https://youtu.be/l9DK5g8hrls 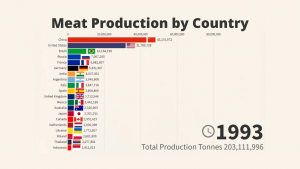 The world’s meat production continues to grow. In 2018 the total figure, worldwide is, over 341 million tons. In this article I will try to 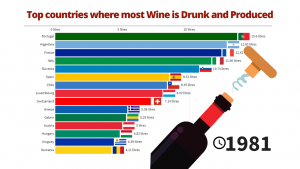 Quality wine enthusiasts around the world continue to increase year after year. Globally, total consumption in 2020 is estimated at around 292 million hectoliters. But