Which are the most spoken languages in the world in 2021? This question is answered by the new video made by the Youtube channel Statistics and Data with projections for the year that has just begun. English remains the most spoken language in the world with over 1.3 billion people. In second place is Mandarin Chinese with 1.128 billion people and in third place Hindi with over 645 million.

The English language, which by 2021 will have around 1.3 billion speakers, is actually spoken as a first language by ‘only’ 370 million people. The fact that English is the world’s most widely spoken first language is due to the large number of people who speak it as a second language. Only over 900 million people around the world use English as a second language. Mandarin Chinese (traditional Chinese is also included in the statistics) is spoken a great deal as a first language, over 921 million, and considerably less as a second, at around 200 million.

What about Italian? The figure for 2021 is substantially stable compared to 2020. There are approximately 68 million people in the world who speak Italian as a first or second language. Of these, however, more than 95% speak it as a first language, while less than 5% speak it as a second language. It is interesting to note, however, that Italian, at least at the beginning of the 1900s, was one of the 15 most spoken languages in the world. This position has risen over time with the strong demographic growth of the nations of the Asian and African continents.

At the beginning of this article, we looked at the evolution of the world’s most spoken languages. As written, the data includes people who speak one or more languages other than their mother tongue.

The most spoken language is Mandarin Chinese with 921 million people. This is followed by Spanish with 463 million and English with 370 million. In fourth place is Hindi with 342 million and Bengali with 228 million. English is therefore the first language in the world in terms of the total number of people who speak it, but it is surpassed by Mandarin Chinese when it comes to first language. 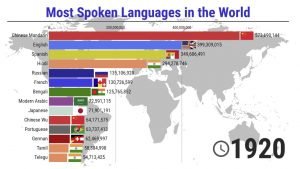 Among the world’s 7.6 billion inhabitants, it is estimated that there are about 6500 languages spoken in total. A truly impressive number that demonstrates how