A few weeks ago I did an article and video on the population in Canada. The number of inhabitants by Province and Territory were analyzed. In this new article we will instead analyze the U.S. States by population numbers over time. We will start with data from 1790 until we get to the latest available data from 2020. We will focus not only on the “classic” data but also on some insights. The data used are those of the U.S. Census Bureau. Population of each US State – (1790/2020).

Let’s start with an initial figure. What are the top U.S. states with the largest populations in 2020? According to the Census Bureau, California leads this class. In fact, California has a 2020 population of almost 40 million. To understand about 2/3 of Italy. In second place we find Texas, with over 29 million, and in third place Florida with 21 million and a half. Among the states with more than 20 million inhabitants, there is also the state of New York with 20 million and 200 thousand inhabitants. Closing the list of the top 20 states by number of inhabitants is Wisconsin with almost 6 million inhabitants: more precisely 5,893,718.

Moving the hand of time back a full 230 years, to 1790, the situation was decidedly different. The leading state in terms of population was Virginia, with 691,000 inhabitants. The state of Virginia was followed by Pennsylvania, North Carolina and Massachusetts. New York was in fifth place with 350,000 inhabitants. Overall, no state in the United States was above 1 million in population. Tennessee closed the rankings with nearly 36 thousand inhabitants.

Over the years, New York State has overtaken Pennsylvania and Virginia to become the largest state in the US for hundreds of years. Only in the 1960s was New York overtaken by California, which, as we have seen, is currently the leading state.

The evolution of the U.S. population through a map

In order to understand how the population has evolved over time in the United States, I made this map. The data shown are ten years old, starting in 1790 and ending in 2020.

Total population in the United States since 1790

The number of people in the United States in 2020 (again according to the Census Bureau) is over 331 million. As of today, the US is the third largest nation in the world behind China and India, which have a population of almost 1.5 billion per state. The United States is growing steadily in terms of population. Compared to the early post-war years, in 1950, the population has more than doubled. In fact, while the population in 1950 was 150 million, it is now 331 million and is projected to continue growing.

Demographic structure of the population

Age- and gender-wise, how is the U.S. population distributed?

I used several sources including the Census Bureau, Worldometers, and Wikipedia to create this article and video.

To view a video of the states with the most people since 1790: https://youtu.be/12iCMDlkzLU 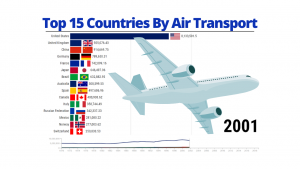 Passengers carried by air worldwide have been increasing steadily since 1970. In some years, however, such as 2001 (due to the 11 September attack) or

Life expectancy is a metric that measures the average age of death for a population. In today’s article, we will look at this metric from

In the past few days we have analyzed the distribution of the population in the individual states of the U.S. We have seen how from 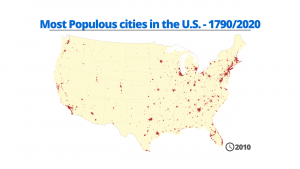 What are the cities with the most people in the United States? How have they changed from 1790 to the present? In today’s article we 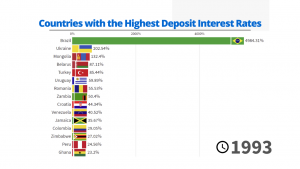 In this new article we will try to answer a question. Which are the countries in the world with the highest interest rates on deposits? 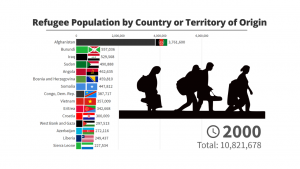 According to the UNHCR (United Nations High Commissioner for Refugees), there were over 26 million refugees worldwide in 2019. In today’s article we will try